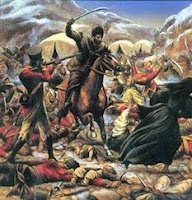 So the UK and the USA have started another stage managed offensive against the Taliban. Embedded journalists send back reports, pictures and films for our newspapers and TV. And our boys are winning. Of course they’re winning - the Taleban were never likely to stand and fight. Which guerilla movement ever has? The Taliban had already retreated into the mountains or become invisible amongst the locals. So what is left for the poor squaddy to do now that he has been deprived of his real job - killing the enemy? Judging by the reports, sitting down and blethering with the remaining locals. With the aid of interpreters the UK and US soldiers are trying to convince the local Pashtun to turn their backs on the evil Taliban, give up growing the evil poppy and everyone will live happily ever after. Sounds like a fairy tale to me.

And no doubt to the Pashtun as well. Just imagine things from their perspective. Here are all those strange soldiers, armed to the teeth, from far away countries, who cannot speak the local language and in 6-12 months time will be back home in the UK or the USA. Meanwhile the Taliban are just around the corner, biding their time. For the Taliban fighters, unlike the UK soldiers actually live there. Afghanistan, including Helmand province is their homeland. They have nowhere else to go and will carry on with their guerilla fighting until they achieve something.

The key deceit in all this is the pretence that the Taliban are some alien force or part of some global terrorist campaign. All the evidence is that they are a nationalist group which represents a significant section of Pashtun opinion. And the Pashtun are the largest ethnic group in Afghanistan. Not a good choice for an enemy. So once upon a time they had an agreement with Osama Bin Laden. Didn’t the USA once upon a time have an agreement with this same Osama Bin Laden when he was a freedom fighter blowing up Soviet soldiers?

It is hard to avoid the conclusion that a some stage, sooner or later, the allies will have to reach a negotiated settlement with the Taliban. Now this may be jazzed up as only dealing with the moderate elements in the Taliban. Lovely word moderate - who decides who is and who is not a moderate? Why the UK and the USA. Whatever, any final settlement is likely to involve bringing the Taliban back into government. And that agreement will almost certainly include a timetable for the withdrawal of all foreign troops. What happens then? Who knows and I suspect few will care.

Sounds unlikely? Anyone looked at the current situation in Northern Ireland recently? Last I remember Sinn Feinn was sharing power with the most die hard of the Unionist parties. Yes the very same Sinn Feinn, with the very same leaders who spent decades fighting the UK and killing and maiming hundreds of soldiers and civilians. The very same Sinn Feinn that UK ministers and Ulster Unionists would berate and condemn and vow to never negotiate with and never surrender to. Now I am not suggesting that there is a simple comparison between the situation in Afghanistan and what happened in Ulster. But one is the same, namely that for all the distaste and hatred that Sinn Feinn provoked, nothing could alter the fact that they did represent a significant section of catholic and nationalist opinion. And they lived there. So short of a bit of genocide, there was ultimately no alternative to negotiation and power sharing.

The big difference is that northern Ireland was part of the UK. While this was disputed by Sinn Feinn, the rest of the country, including of course the majority in northern Ireland itself, did not. So in a sense that meant that the UK wasn’t going to just go away. Too many of its citizens lived in northern Ireland and they weren’t going to go away. And Sinn Feinn was never in any position to embark on a bit of genocide on its own. Hence the stalemate and hence the current power sharing.

Afghanistan of course is not and never has been part of the UK, nor the USA. At some stage the majority in these countries will weary of the whole ghastly escapade - the deaths, the maiming, the cost. And at some stage our troops will come home. Everyone knows this - including the Taliban. All they need to do is survive - in the mountains, in Pakistan or lost among the local Pashtun. Perhaps this current offensive really is stage managed. We claim a glorious victory over the radical elements in the Taliban and negotiate a settlement with the remaining moderates. Declare victory and come home. Sounds good.

Email ThisBlogThis!Share to TwitterShare to FacebookShare to Pinterest
Labels: Afghanistan