PIIGS and the Euro 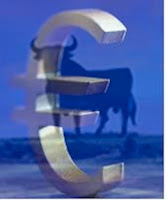 Recently much coverage in the media has been given over to the alleged crisis facing the Euro and to the worries about the economic prospects for the Eurozone. In particular the focus is currently on the group of countries sometimes referred to as PIGS - Portugal, Italy, Greece and Spain. This has sometimes become PIIGS, with the inclusion of Ireland. This insulting and possibly racist term has of course been coined by Anglo-Saxon commentators. No doubt displaying their centuries old distaste and disapproval of southern and catholic Europe. Ireland, a recent addition, though not southern, is a catholic country. Given the recent performance of the the UK and USA economies and their joint responsibility for the financial and economic mess most of the world is in this is a form of chutzpah that even the most ardent Zionist would find hard to voice.

It is of course ridiculous to group together such disparate countries, each with its own economic and social characteristics. In the USA, the distinguished economist, Paul Krugman has been quite vociferous in disentangling the differences among these five economies, though he is still happy to use the acronym. In particular he has confirmed that whatever problems face the Spanish economy, they are not due to fiscal irresponsibility. What is interesting about Krugman’s contribution is that he seems to identify rising wage costs and uncompetitiveness as the main reason for Spain’s current troubles. And by implication, that the solution consists at least in part in lowering wages. And this from a self proclaimed Liberal. No wonder we are all in such a sorry mess, when even the apparently good guys still blame the poor. Krugman also places part of the blame, or at least the difficulty of finding a solution, on the Euro.

Krugman’s analysis has not gone unchallenged and many commentators to his blog have pointed out that the Spanish economy has in fact done remarkably well over the past decade or so. In particular, it seems that real unit labour costs in many sectors, for example car manufacturing, are in fact lower than in Germany. Spain is it seems still competitive in many markets. In fact, Spain is one of the few Western economies to have gained market share of world trade in the aftermath of the crisis.

Spain has also welcomed over five million immigrants over the last decade, one of the highest rates in the whole of Europe. So, what is really remarkable is not the level of unemployment but actually how much employment the Spanish economy has managed to create over the last decade. And, contrary to popular belief, many of those jobs have been created outside the construction sector and are not low-skilled jobs. Spain is, even after the crisis, the country that has created more jobs in the Eurozone since the creation of the Euro: twice as many jobs as Germany and three times as many as the UK. And many of those are permanent, high quality jobs.

As regards what is causing the current economic woes, various suggestions have been put forward. In the case of Spain the relative collapse of the property market has had a major impact on the economy. Where Spanish firms have become less competitive it is claimed that this is due to high corporate margins and therefore that it is lack of competition in some sectors rather than salaries that is the real issue. The lack of a transparent and effective tax system seems to be a major contribution to the Greek crisis. In most of southern Europe there is still much to be done to improve the transport infrastructure that is a key part of any competitive improvement in their economies.

All of which suggests that there is no one answer and that hitting the poor and leaving the Euro is most definitely not part of the answer. It is interesting to note that much of the glee about the troubles facing these countries is a thinly veiled hope that the Euro will collapse. For nothing worries the UK financial elites - the ones that brought us the current financial crash - is that the Euro succeeds. If the lack of competitiveness is part of the cause of Spain’s current woes, then how does leaving the Euro make any difference. If anything it is the existence of the single currency that is exposing this lack of competition. The same applies to the need for better transport networks or the need for a efficient and effective tax regime. What positive difference would leaving the Euro make to either of these challenges? None as far as I can see.

Much of the current media coverage given to the travails of our southern European partners is of course a useful scam on the part of our elites to avoid too much scrutiny of what they have done and what they intend to do. And what they intend to do, whether it is New Labour or the Tories, is to put most of the pain onto the backs of the poor and the not so well off. Only the timing and the intensity of the pain is in question. Still no sign that it is the elites, particularly in the financial sectors who should bear the brunt of any pain. Seems we’re not so different from the PIIGS after all.