Since my last post on stitching in November I have managed to complete just three pieces, with a couple of little bits thrown in. However the three were pretty large works. The first was based on a pattern we saw on a steeple in a village in the Klettgau. This is a wine growing valley in Kanton Schaffhausen, which we visited last September on our trip to Switzerland. The steeple stood out as it was extremely large and was covered in very brightly coloured tiles. I stuck to the original pattern and colour combination as best as I could. The stitched area is approximately 27cmx25cm. It was stitched with wool threads on canvass. This is what is looks like. At present it is lying in my stash box, as I still haven’t decided what to do with it. 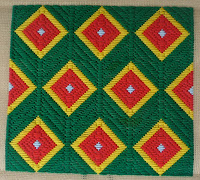 My next project was a slightly smaller version of the Five Easy Pieces I had done in the autumn. It is about 18cmx12cm and also features five sections and uses primarily Bargello patterns. This time though one of the sections, the upper right corner was a rectangle filled with straight lines. These stitches are all diagonals over three threads. This piece was stitched on Aida 18ct fabric using two strands of DMC cotton thread. I am tempted to call it Five Small Pieces. It also lies in my stash box. As usual with Bargello projects I try to use an analogous colour scheme with the odd bit of complementary thrown in to jazz things up a bit. As you can see this one predominantly uses blues.

Before Christmas I did a couple of very small pieces, a bookmark for someone’s birthday and a round coaster. Over Christmas and New Year I put away my stitching things as we had Emma and Co. for company. Alessio is still a bit young to be introduced to the delights of stitching. Since then I have spent most of my stitching time completing my largest project so far. This has been my attempt at a Palestinian mini wall hanging. I used Aida 18ct fabric and two strands of DMC cotton thread. The final stitched area measures 45cmx24cm. I started on 7th January and finished stitching on 19th February. Never before spent so long on one project. I have still to attach it to some pieces of driftwood which I intend to use as the top and bottom attachments. Here is what it looks like at present.

The hanging is made up of nine different traditional Palestinian patterns. Below is the top part in a bit more detail.

The outside squares down the sides are known as the Moon of Ramallah. The top and bottom borders use a pattern called the Crowns. The main features working from the top are 1. Cockerels on top of 2. Flower Pots. Next is the middle section in a bit more detail.

First comes 3. a pattern known as Roses and Birds. This is famed on the sides by 4. Lilies and above and below by 5. Variations of Chick Peas and Raisons. The central section 6. features two Harps, framed by 7. part of the Kohl bottle pattern. The sequence from the Roses and Birds is then repeated to form the bottom half of the design. Though the patterns are genuine traditional Palestinian ones there are two caveats. The first is that Palestinian needlework uses the cross stitch while I use a simple diagonal over one fabric thread. This changes the pattern slightly as the right hand side is not an exact replica of the left hand side. The second caveat is that I know next to nothing of the colour schemes used in Palestine. From the little I have discovered on the net, they do seem to favour bright colours, particularly reds. Hence my choice of colours for this mini hanging.

My current project, which I have just started this week, is based on another of the photos I took last September in Switzerland. Once again I am back to canvas and wool. After this project is finished I need to sort out and find a simple way of tidying up and organizing my stack of threads etc. This could take long enough.