In Praise of Sitges

Sitges is a small town on the coast south of Barcelona. It is one of our favourite places to visit. In fact in the 1980s the whole family lived there for about three years. We had a great time. The girls went to the local Spanish speaking school - Esteve Barrachina. As a result they became pretty much fluent in the language. In the 80s it was still a traditional town and very safe for children to walk and play about the place. With its mediterranean climate people were out and about till very late at night. We lived in a flat very close to the town’s centre and only about 15 minutes from the beaches and esplanade. The only downside was next door was a very lively Irish pub. This was only a problem at the weekends. The source was not the pub itself, but rather the racket from the street, just below our bedroom window. Early in the weekend mornings - shortly after midnight - dozens or more young people would congregate outside the pub and talk and shout away. The worst was the motos. They would be revved up and revved up a bit more and then a bit more again. This revving up often lasted 20 minutes or more before the owners finally decided to swoosh off home. Still the rest of the time the place was quiet and Sitges itself is such an attractive and interesting little town.

The town is about 40km south of Barcelona and when we lived there the road from the city wound its way up and down and round several very rocky coves. With sheer drops to the sea, there were some very scary experiences driving along that road. Now there is a modern motorway which goes straight through the mountains in a series of tunnels. The town is at the end of this mountainous section. The old town is built on a rocky promontory which rises from the beaches on either side. People have lived in this area since time immemorial. By the middle ages Sitges had become a small fishing village. Wine making was also important and even today you can still sample the locally produced sweet dessert wine, a kind of malvasia. Sitges began to take on its current shape and character in the years preceding the 1st World War. The town became a favourite haunt for all kinds of artists - writers, painters, musicians and other intellectuals and an important centre for the spreading of Modernisme (Catalan Modernism). Nowadays Sitges is a popular tourist destination for people from all over Europe, while it still attracts people from Barcelona for weekend breaks. Here is an aerial view of the town. 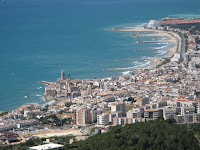 The old town is still a maze of narrow streets which stretch from the railway station all the way down to the esplanade and the beaches. Some of these streets date back to medieval times and some are pretty steep. Most of the buildings are a feast for the eyes. Old Sitges is a wonderful mix of architectural styles. In particular there are some lovely examples of neo-classical, modernist and Catalan Art Nouveau styles. Most of them were built by the “Americanos” - Sitgetans who had made their fortune in Cuba or other parts of what used to be the Spanish American Empire. Now rich they returned home determined to show off their wealth with the building of extravagant homes. Here are a couple of examples.

While Sitges now has its fair share of drab recently built buildings, good modern architecture can still be found in the town. Here are some examples of new houses built along the Esplanade.

The pride of Sitges must be its main church. This is set high on the rocky promontory and its front façade overlooks the sea. The church is dedicated to two saints and its full name is Església de Sant Bartomeu i Santa Tecla. It is a seventeenth building which dominates the seafront and has become the iconic image of Sitges. The inside is richly decorated with many side chapels, but it is the façade and its setting which sets it apart. 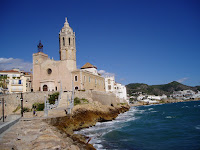 Sitges is still home to many artists. There are many private studios and a good number of little galleries in addition to three sizable museums. One of our most prized paintings is this little gem by Aragonese painter, Manuel Blesa. He now lives and works in Sitges and we bought this from the artist himself. He is a lovely old man. 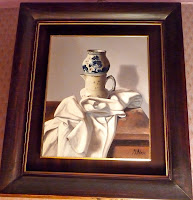 As one would expect from a tourist destination, Sitges has an extensive and varied range of bars, cafés and restaurants to suit all tastes and expenses. While there are many to choose from along the front, we tend to prefer those in the old town. A must for anyone who likes to sit quietly and watch the world go by is Café Bar Roy. This is a Sitges institution on one of the main shopping streets leading away from the main square - Cap de La Vila. Here you can sit outside on the raised platform, supping your coffee and watching the elegant and the not so elegant Sitgetans and tourists pass by. Another favourite little bar and café was Bar Xatet, which was located on one of the corners of Cap de La Vila. This was a truly wonderful little bar-café. Tiny really with only about four or five little tables, plus a few outside. But Xatet served a great range of tapas and had some really impressive legs of cured ham - the famous jamón serrano - hanging from the ceiling. Some nice brandies as well. But what made Xatet famous were the pictures and photos on the wall. They covered every available space. Original paintings and cartoons and photos of famous people from all over the world. A cosy and comfortable atmosphere that reminded you of life in a bygone age. Unfortunately it is no longer a café, and has become an expensive sandwich take-away. The hams are still there though. Our favourite bar is probably Bar Baron. This is an even smaller establishment run by Sr Baron himself. We frequented it a lot when we lived there. It is a very unpretentious affair - a few tables, a small choice of tapas, a couple of beers and very cheap wine. However it is central and popular with both locals and visitors. Anytime you go there would be a few locals and some Belgians, or Dutch or Britons. Most clients just popped in for one or at most two beers and then moved on to be replaced by new customers. Sr Baron was always very friendly and welcoming. The place is a bit modernised now, with bright new toilets downstairs. Sr Baron is still there, though it is eldest son who runs the place.

Sitges is justly famous for its lovely sandy beaches. The main beaches run south along the coast from below the church for about three kilometres. Originally this would have been just one extensive beach area and where the fishing boats would have landed. Now the coast has been sectioned off into about six or seven separate beaches. The one nearest the church still has a few boats lying on the sand. The others are all popular sunbathing beaches. Running alongside the beaches is a very fine wide Esplanade. This is a popular place to take a paseo. At any time of the day or evening the Esplanade is full of people of all ages and sizes and states of dress or undress. Roller skating, cycling, skateboarding, jogging or just walking. This is a view along the beaches from just below the church. Sitges also has a smaller beach - Sant Sebastià - and this has always been our favourite. On the other, northern side of the promontory, Sant Sebastià is a lovely enclosed beach, as it is bounded by another, smaller promontory at its other end. Rarely as busy as the other beaches, it is perfect for us to paddle about in the water, take the occasional dip and just lie down and enjoy the sun. We usually would go in the morning. Behind the beach there are some fine cafés and bars. We would usually end up sitting outside one of them enjoying a cool beer and some anchovy stuffed olives and perhaps some artichokes. Such a pleasant and civilized way to live. Here is a view along the beach. You can see the edge of the mountains in the background. 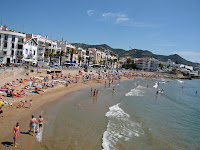 Though Catalans tend to be a bit more restrained than people from other parts of Spain, they still like to celebrate in style and often. Not for nothing is Catalunya home to Cava - Spain’s very own champagne. In fact cava is produced just a few miles inland from Sitges. And there are plenty of opportunities to open a bottle or two. For Sitges has developed a passion for festivals. There is hardly a month of the year in which there is not some special event or other excuse for a party. Carnaval, which I wrote about in a previous post is probably the earliest festival time. Sitges of course has two saints and thus two big festivals. Sant Bartomeu is honoured at the Festa Major which takes place towards the end of August. A slightly smaller festival in honour of Santa Tecla is held towards the end of September. Both are very lively affairs with something for everyone - dancing, music and street parades. The festivals always end with a terrific firework display with lights up the sky and the church façade. The street parades are fascinating and enthralling events. Key participants include traditional music and dancing groups, giant representations of historic figures from Catalunya’s past and the wonderful castellers. This involves building a human castle of four or more stories high. At the top a small child clambers to the top to great applause. Here is an example of a six story castle and two giants.

To see the gegants in action you can watch this youtube video here.

The most spectacular feature of the parades are undoubtedly the mythical creatures which torment and sometimes terrify the onlookers. Life sized representations of fierce animals, the devil and dragons rampage about with fireworks exploding right, left and centre from the dragon’s mouth. Here is a particularly fiery dragon.

For a youtube video of the dragon in action try here.

Other popular events in Sitges include a film festival, a wine festival and a tango festival. Midsummer - St John’s Day - is of course celebrated everywhere in Spain and Sitges is no exception. Here he is known as Sant Joan and there are the usual parties and fireworks. Corpus Christi is another special time when the main streets of the town are turned into carpets of flowers. On the days preceding Corpus local groups draw in chalk intricate designs on the street surfaces. During the night and into the wee small hours they then fill in the designs with petals from hundreds and no doubt thousands of flowers, especially carnations. Here is an example. 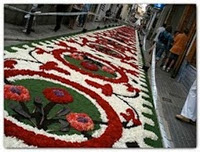 Sitges is a gem of a town, and one we delight in returning to as often as possible. If you get the chance to visit the place, jump at it. As Barcelona is only about 30 minutes away by a very good train sevice, you can get the best of both worlds - a city break and some relaxing by the sea in an historic and charming town.
Posted by Unknown at 12:27

Email ThisBlogThis!Share to TwitterShare to FacebookShare to Pinterest
Labels: Sitges