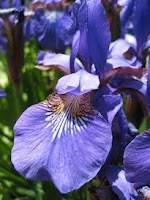 Winter is still with us in February, though we often begin to see the first signs of new flowers in the garden. This early in the month there is not much to see this year. A couple of crocuses and snowdrops are about to burst into bloom. By the end of the month there should be more colour. If cold winter does actually go away! This has been the worst - snowiest and coldest - winter since records began. And to tell the truth, I’m getting a bit fed up with it all. Let’s hope that spring brings some sustained sunshine and warmth.

Unfortunately the omens are not too good. Groundhog Day has come and gone and Punxsutawney Phil has emerged to see his shadow before chilly revelers in Gobbler's Knob, meaning winter will last another six weeks. At least in Pennsylvania. With a bit of luck Phil’s forecasting doesn’t extend as far as Scotland. It seems that Groundhog Day in the USA comes from an old

German tradition, which holds that if a hibernating animal casts a shadow on Feb. 2 -- the Christian holiday of Candlemas -- winter would last another six weeks. If no shadow was seen, legend said spring would come early. I wonder if this tradition is still alive and well in Germany today.

Back to February, and in addition to the three day festival in Punxsutawney, there are quite a few enticing festivals around the world this year. St Valentine’s Day is not exactly a festival, but any excuse will do for a night out with the person you love. The 14th is also the day for celebrating the Chinese New Year. This will be the year of the tiger. How about a Chinese meal for St Valentine’s Day? Another festival that caught my eye is the Buenos Aires Tango Festival, which takes place in the last week of February. It is summer down in Argentina just now, so this would be a good time to go. Too late to book up for this year, but one I must definitely put in the diary. Any excuse for another picture of tango dancers. 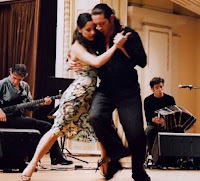 This year of course all the pre Lent festivals take place in February. This is the period of forty days before Easter when traditionally one would fast and pray, in remembrance of the forty days that Jesus spent fasting in the desert whilst being tempted by Satan. As a predominantly Protestant country there are no lively festivals over here unfortunately. The most we can offer is Pancake Day. This is the popular name given to Shrove Tuesday throughout the UK. The name Shrove comes from the old word "shrive" which means to confess. On Shrove Tuesday, in the Middle Ages, people used to confess their sins so that they were forgiven before the season of Lent began. Shrove Tuesday is a day of celebration as well as penitence, because it's the last day before Lent. Throughout the United Kingdom people indulge themselves on foods that traditionally aren't allowed during Lent. Fat, butter and eggs were forbidden during Lent, so people would prepare and eat wonderfully rich pancakes as their last piece of culinary indulgence before the beginning of Lent. Not that popular nowadays, it was still a big occasion in my childhood. Some places would hold pancake races and whole TV programmes would be given over to the making of special pancakes. Whatever, go on and indulge yourself with a nice, rich and buttery pancake with dollops of real cream. Then it’s bread and water.

In Catholic countries the days before Lent are celebrated with a popular carnival. It seems the word carnival comes to us from the Latin "carne vale", which means either "farewell to the flesh" or "farewell to meat". Hence the indulgence associated with the most popular carnivals. The most famous is probably the carnival in Rio de Janeiro in Brazil. Exotic, hot, sexy and steamy are the words that are most associated with Rio’s festival. The Mardi Gras festival in New Orleans is probably pretty hot and steamy too. I wonder if it is still as popular post Katrina?

In Europe the most famous is probably Il Carnavale in Venice, which I always associate with wonderful masques. The only carnival I know of personally is the one in Sitges. There, Carnaval has become one of the biggest and most popular festivals in the whole of Spain. Here is the beautiful poster for this year’s festival, designed by local artist Blanca Benítez.

When we lived there in the mid 80s, the place was jumping during Carnaval. Thousands of people would come from France, Germany and the UK to mix with the locals. Sitges has a large gay community and some amazing and gamourous drag shows abound. There are also some lovely impromptu sessions outside the most popular bars. However, the Sitges Carnaval is not a particularly gay festival and the local Catalan women, young and old, are more than happy to indulge in a bit of Rio style glamour with fancy dress, feathers, sequins and plenty of female skin on display during the street parades. As can be seen here.

February seems to have been a mixed month for my ancestors. A couple of deaths. Elizabeth Lily Philip, who was my paternal grandmother, died in St. Andrews on the 23rd in 1965. I remember her well, as lived just along the road from us. I was a regular visitor at her house, where she lived with her daughter, my aunty Betty. Lily’s mother, my great grandmother, Elizabeth Robertson also died in February, the 22nd in 1925, also in St. Andrews. Strangely, this Elizabeth was born in February, the 11th in 1844. My aunty Betty was named after this woman, her grandmother, as Betty’s full name was Elizabeth Robertson Rutherford.

There were two weddings in February and curiously they involved a father and son. Henry Mohring Henderson (where did that middle name came from?) and Helen Wright were married on the 6th in 1880 in Dundee. They were my mother’s paternal grandparents. Henry’s son, James Davidson Henderson, then went on to marry Jessie McGregor Melville on the 10th in1905, also in Dundee. They were of course my mother’s parents and my grandparents. James died young, while Jessie lived to a ripe old and died well into her 90s. Like my other grandmother I remember Jessie very well. When I first knew her she lived on her own in a two roomed attic flat in a very old stone tenement off the Hilltown. You had to climb up an enclosed spiral staircase, which was built separate from the main tenement to reach the attic landing. The outside loo was built into this stairwell. From the landing you then had to climb another steep stair to reach her flat. Wonderful it was. In the kitchen room there was a bed built into a recess in the wall, just like you get in some old Dutch houses. The other room was full old things like a spinning wheel, a mangle and other items from a far away world.

February’s flower as you may have gathered is the violet. A rather pretty little flower, it symbolises faithfulness, humility, chastity and protection from evil. Alternatives if you don’t like violets are the primrose or the iris.

Most of the birthstone traditions have the amethyst as the gemstone for February. The legend of the origin of amethyst comes from Greek myths. Dionysius, the god of intoxication, was angered one day by an insult from a mere mortal and swore revenge on the next mortal that crossed his path, creating fierce tigers to carry out his wish. Along came unsuspecting Amethyst, a beautiful young maiden on her way to pay tribute to the goddess Diana. Diana turned Amethyst into a stature of pure crystalline quartz to protect her from the brutal claws. Dionysus wept tears of wine in remorse for his action at the sight of the beautiful statue. The god's tears stained the quartz purple, creating the gem we know today. The amethyst symbolises stability, peace, balance, sincerity and a calm disposition. Here’s a lovely example to end with. Wishing everyone a happy Chinese New Year and a bit of spice for Carnaval.