NATO atrocities in Afghanistan and Iraq 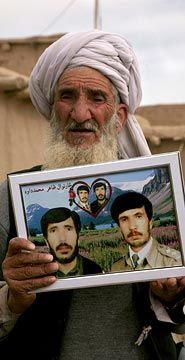 More and more evidence is becoming available about the extent of the atrocities committed by NATO troops in both Afghanistan and Iraq. Almost as disturbing as the atrocities themselves are the lengths that NATO will go to in order to try and cover up the atrocities. Most of this post is about an incident which occurred in Paktia province in Afghanistan on February 12th.

On that day the Sharabuddin family had more than 25 guests, as well as three musicians in their home in Khataba village to celebrate the naming of a newborn child. There was however very little celebration as five of the guests - two pregnant women, a teenage girl, a police officer and his brother - were gunned down by US Special Forces during a botched raid.

This was of course bad enough, but the US forces then tried to cover up their action. According to an investigation by the Times of London this involved the implicated soldiers carving the bullets they used to kill the women out of their bodies and washing their wounds with alcohol to eliminate traces of their involvement. The first US-endorsed story claimed that US forces had killed two Afghan men because the men were insurgents armed with rifles. The initial story went on to state that 3 women were subsequently found dead (their hands tied and their mouths gagged) inside a room in the house (implying that the murder had been carried out by the home’s inhabitants).

This totally false version of what happened was of course the version that was presented to the public. Virtually all of the mainstream media dutifully recounted the NATO lies without making any attempt to question its veracity. If anything some of the US media go overboard and jazz up the official version. This is akin to propaganda. And it is not as if there was no counter evidence available. Right from the beginning of this story some reporters and agencies questioned the NATO account and even had the audacity to go and interview the family and their neighbours in the village where the atrocity happened. These included Associated Press and the Pajhwok Afghan News, an independent news agency created in Afghanistan to enable war reporting by Afghans.

Special mention should go to Jerome Starkey, reporter for the Times of London. He has a most interesting article on the whole event on the Nieman Watchdog Foundation website. As he states in his piece: “The only way I found out NATO had lied -- deliberately or otherwise -- was because I went to the scene of the raid, in Paktia province, and spent three days interviewing the survivors. In Afghanistan that is quite unusual. NATO is rarely called to account. Their version of events, usually originating from the soldiers involved, is rarely seriously challenged.” (my emphasis) Starkey’s full article can be read here.

This should be the key story about our invasion and occupation of Iraq and Afghanistan. How easily we, the public, are lied to by our military and our politicians. And, to make matters even worse, how willingly our mainstream media, with one or two honourable exceptions, colludes in all this lying.

A further example of this collusion can be found in a typically forceful post entitled More cause and effect in the War against Terrorists, by the great Glenn Greenwald. ABC News reported on the attempt by the U.S. Special Forces to apologize to Haji Sharabuddin, the 80-year-old patriarch of the family, by offering him two sheep (a gesture of begging forgiveness in Pashtun custom). ABC News in an online article included this:

“Presenting sheep is such a powerful form of requesting forgiveness that the father is now obligated not to take revenge, even though he has told reporters he wanted to become a suicide bomber. . . . “

The ABC News article celebrates the fact that the sheep offering "will help defuse" lingering anger over the massacre and may help quell the demand for an investigation, limiting the fallout of the incident.

Greenwald in his post, which you can read here, goes on to reveal how we come to know all about the above attempt at an apology. He writes, “The reason we know about the U.S. Special Forces' sheep sacrifice is because The Times of London's Jerome Starkey, who broke the story about what really happened in the Eastern Afghanistan civilian killing, was present at the scene and described it in detail, including the fact that the U.S. Vice-Admiral who offered the sheep, along with Afghan soldiers, wanted to bar the media from witnessing the event and refrained only when the family members insisted that they stay. In contrast to ABC 's sunny report that all is now forgiven, Starkey writes:

"When people come to your gate and ask forgiveness, according to Afghan law, it’s difficult to reject them," Haji Sharabuddin said later. "I am happy they came." But the family insists that it still wants justice. "I don’t care about the money," Haji Sharabuddin said. He believes the troops attacked after faulty intelligence from one of his enemies — a spy. He wants the Americans to face international justice and the spy handed to Afghan authorities and punished. "When they surrender the spy, then I will make a decision. Maybe I will forgive them," he said.”

But the fact that this 80-year-old man was vowing to perpetrate a suicide attack on U.S. forces speaks volumes about the effects of our actions in that country. And lest anyone thinks that this atrocity in Paktia was an isolated incident, there is a whole litany of such atrocities. All initially denied, then covered up and only late in the day finally admitted to. Another Glenn Greenwald post, here - How Americans are propagandized about Afghanistan - gives some more details about the pervasive nature of the atrocities committed in our name. In the post he also reports on the, largely overlooked statement from Gen. McChrystal, where he admitted, regarding U.S. killings of Afghans at check points: "to my knowledge, in the nine-plus months I've been here, not a single case where we have engaged in an escalation of force incident and hurt someone has it turned out that the vehicle had a suicide bomb or weapons in it and, in many cases, had families in it. . . . We've shot an amazing number of people and killed a number and, to my knowledge, none has proven to have been a real threat to the force." And as I documented before, the U.S. media constantly repeats false Pentagon claims about American air attacks around the world in order to create the false impression that Key Terrorists were killed while no civilians were.

Further confirmation of the willingness of our “boys” to commit acts of wanton violence comes in this video, published by Wikileaks, of another “incident”, this time from July 2007 in Baghdad. The footage shows an attack from a US helicopter, in which a group of around 7-8 people are shot down. The group included two TV cameramen for Reuters who has been trying since 2007 to get the military to release the video. Wikileaks does not say how it got it.

On the video, the U.S. troops later fire at a van that comes to pick up a wounded survivor from the assault. Then, as U.S. ground troops arrive, one of their voices on the intercom is laughing about having driven over a body. It is also very disturbing to hear the troops doing the shooting talk about “engaging with the individuals”, when what they are doing is killing apparently innocent civilians.

All this shows how damaging our continuing occupation of Iraq and Afghanistan is to us, in addition to the damage we are doing to Iraqis and Afghanis. This aspect of the occupation is well brought out in this post by Helena Cobban on her blog - Just World News. She writes" "All these revelations that keep coming out about the strong propensity of U.S. (and Israeli) troops to engage in excessive violence, and the propensity of their respective high commands to cover up that fact, underline a couple of important lessons:

Using violence to try to resolve differences is outrageous, and barbaric. All of us who live in countries that claim to respect human life and human liberties should renounce it. Guess what, we do now have international institutions that, if further strengthened, could help us resolve all the world's big conflicts without recourse to war."