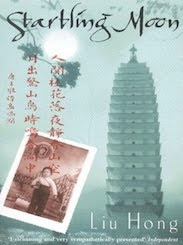 Startling Moon was the Reading Group’s book for May and is one of very few - two or three - books I have read by Chinese authors. Though it has to be said they have all been written in English by Chinese who have emigrated to the west. Startling Moon is by Liu Hong who was born in Manchuria in 1965 and left China in 1989 and now lives in England. The book which was published in 2001, appears very much like an autobiography as the protagonist and narrator was also born in Manchuria in 1965 and the book ends in 1989, though with the narrator still in China.

The narrator and main protagonist is Taotao and the book is her memories of her life from childhood in northern Manchuria through university in southern China to living and working in Beijing. The story starts with Taotao as a five year old who vividly though simply describes the hardships and restrictions of life in provincial China in the 1960s and 70’s. Liu Hong quite successfully presents us with the Cultural Revolution as seen through the eyes and ears of an obedient and apolitical girl. Though Taotao and her own parents do not suffer themselves, other members of the family do and the book is suffused with an air of repression. It is still surprising to learn just how poor conditions where in those days in China, at least in northern China. Cabbage seemed to be the main source of food and the long winters were extremely cold indeed.

Conditions however do improve, as does their diet. And Taotao wins a place in a University in southern China to study English. This was her first experience of living away from her family and during these years she makes new friends and gradually and very timidly becomes a bit more politically aware. However she remains pretty much an obedient Chinese girl, accepting the constrictions imposed by the Communist regime. Even when she moves to Beijing to work as a translator in Beijing these constrictions - on where you can live and where you can work - are more irritating than anything more profound.

Even here she turns out to be incredibly lucky and manages to get a job as a translator for a film company that is about to travel to Inner Mongolia to shoot an international film. This of course is the cue for all kinds of images of freedom - the wide open spaces, a different and more open culture, not to mention all those westerners. Taotao enjoys the freedom of her new job and it is during this journey that she becomes fully sexually aware, though nothing physical happens. The last section of the book is mainly back in Beijing in 1989 during the run up to the pro democracy demonstrations and their subsequent crushing by the regime. However Taotao is only peripherally involved in any of this as she is more interested in her blossoming sexuality and specifically her relationship with Robert, another westerner. In fact a lot of the latter part of the book is spent on Taotao’s inner debate on whether she should or could have sex with a man before marriage. The events at Tiananmen Square are almost a substitute climax for her unfulfilled sexual longings.

I enjoyed the book as it gives what seems to be an authentic description of one girl’s experiences of growing up in China during a critical period in its history. It is a very personal book which in many ways is its strength. Taotao’s inner debates about sex and propriety spring from her account of her childhood and her family’s and the state’s expectations of a ‘good Chinese girl’. What the book doesn’t really do or even attempt to do is to give an insight into the background to the pro democracy movement. Taotao herself has led a pretty good life. In Chinese terms, almost a charmed life. Though at one stage she feels trapped in what she thinks will be her job for life, she immediately gets another job in the glamourous film industry. As her friend points out, ‘things are not as rigid as before’. And Taotao herself never becomes actively involved in any political activity.

Email ThisBlogThis!Share to TwitterShare to FacebookShare to Pinterest
Labels: books