Last weekend we witnessed yet another murderous onslaught by the Israeli military against defenceless Palestinians in Gaza.  25 Palestinians have been killed and around 80 wounded.   Yet very little has been said in condemnation of these killings anywhere. The ostensible justification for the killings is that the attack was to assassinate Zuhir al-Qaisi, a leader of the Popular Resistance Committees (PRC).  The other 24 deaths and the 80 wounded were presumably just unfortunate.  Or perhaps they also deserved to be killed by the Israelis.  That is clearly the view of the Israeli government and the IDF.  The dead, or at least 20 of them, four were admitted to be civilians, were all members of the PRC and thus in Israeli eyes, legitimate targets.  The Israeli claim is that the PRC were about to launch an attack against Israel.  However even this claim is somewhat disputed by Israel’s Defence Minister, who only claimed that the PRC “were apparently involved with preparing a large-scale attack.”   (Emphasis added)  He want to say, “I cannot say yet whether this attack has been thwarted.”
So what was the real reason behind this latest Israeli onslaught?  There are various possibilities, but all seem to come down to the likelihood that Israel wanted some kind of dress rehearsal for any retaliation in the event that it, Israel, does attack Iran.  In other words Israel deliberately provoked the rocket attacks from Gaza in order to test their new Iron Dome anti missile defence system and to prepare the population for further rocket attacks.  Sounds incredible, but then is Israel a rational actor anymore?  This is the provocative title of this article by Jerry Haber, on his Magnes Zionist blog.  Jeremiah (Jerry) Haber is the nom de plume of an orthodox Jewish studies and philosophy professor, who divides his time between Israel and the US.  In it he examines the question of whether the attack was deliberately designed to provoke a response.  Haber also has another post on the morality of extra-judicial killings, with specific reference to these most recent Israeli attacks.  You can read it here.
As regards the lack of response to these extra-judicial killings, in Israel they were a cause for celebration, if not gloating.  Below is a still from Israeli TV.   In it Channel 10’s military correspondent Alon Ben David shows the score:  “Death toll:  Israel 0, Gaza 25”.  Photo: nan10.co.il.  The photo comes from this blog post by Ami Kaufman on the Israeli group blog, +972. 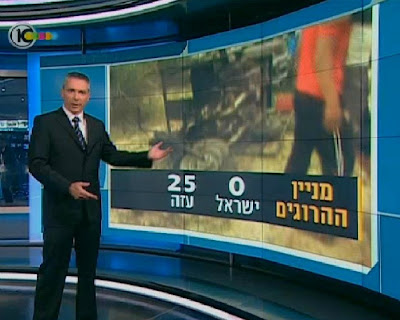 Here in the UK, as in the USA, there has been the usual we must support Israel narrative.  When a US soldier killed 16 Afghanis recently, there was justifiable outrage and the soldier has been arrested.  He will probably face some kind of charge and imprisonment.  No such chance that the Israelis who killed the 25 Palestinians will face anything other than adulation.  And we claim the moral high ground!
Posted by Unknown at 18:15