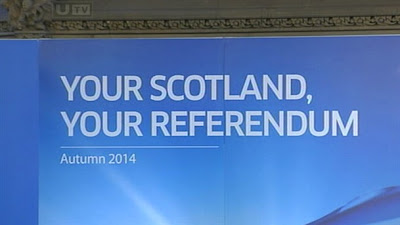 The Scottish government has earlier this year announced the wording of the question it would put to the Scottish electorate in the forthcoming Independence referendum.  Scots would be asked: “Do you agree that Scotland should be an independent country?”  Whilst the various Unionist groups are now in favour of an independence referendum, they are not at all happy with this question.  Though at first most of them seemed to agree that it provided a clear and simple question.  However now there have been repeated suggestions that the proposed question is a leading question and that voters should somehow be given two options - both of which you can vote yes to!  Not immediately clear that this would provide precision and clarity.
Anyway, to help clarify matters a little, I have done a brief google search on questions used in independence referendums.  With the demise of the USSR, Czechoslovakia and Yugoslavia, many newly independent countries have been created in Europe alone.  All within the past 20 years or so. Not all of them bothered with a referendum.  Slovakia and the Czech Republic agreed on dissolving the Federation at governmental level and just went ahead and negotiated the independence settlement.
However, some of these newly independent countries have validated their independence via a referendum.  In my brief quest I came across four examples.  In two cases, the voters were asked to support an already declared state of independence.  For example in the Ukraine the question was:  “Do you support the Act of Declaration of Independence of Ukraine?”  A similar question was used in Georgia, where the question was:  “Do you support the restoration of the independence of Georgia in accordance with the Act of Declaration of independence of Georgia?”
Now neither the current Scottish government nor the Scottish Parliament are about to pass an Act declaring independence, so we can rule this particular type of question out.  Though it is worth noting in passing that no-one in the UK at the time of these referendums questioned the validity of this kind of question.  I have found two other referendum questions that are more in line with the SNP’s proposal.  In Slovenia the voters were asked this question:  “Should the Republic of Slovenia become an independent and sovereign state?”  Whilst in the most recent independence referendum in Europe, the voters in Montenegro were asked this question:  “Do you want the Republic of Montenegro to be an independent state with a full international and legal personality?”   While different in wording, these two questions are pretty similar in meaning to the one proposed by the SNP government.  Again it is worth emphasizing that nobody in the UK, not even those now prominent in the Unionist camp, seems to have questioned the validity of these referendums.  Not only that, the UK promptly recognized the status of these countries as independent states.
It is also worth noting that in all the above cases it was the government of the independence seeking states that organized the referendum, including the choice of question.  Given that there was no opposition then to this process, and noting that the Montenegro referendum was as recent as 2006, there is a whiff of hypocrisy about the current brouhaha over the wording to be used in Scotland.  Clearly the Unionist have so little faith in their own case that they need to resort to all kinds of diversionary tactics.
Posted by Unknown at 10:31