Last week we were subjected to yet more nonsense from the Unionist camp.  This time around we got a near apocalyptic vision of how terrifying an Independent Scotland would be for all of us.  We will apparently suddenly become much more likely to suffer terrorist attacks, the rest of the UK might have to bomb Glasgow and Edinburgh airports, we could be faced with a flood of immigrants from the rest of the EU and as a result border controls might have to set up between Scotland and England.  Not quite sure how this latter claim fits in with the other two.  After all who would want to come to a country that was about to become a regular target for terrorist attacks?   Presumably all these immigrants from other EU countries would only come because Scotland, an independent Scotland remember, was a rich and successful country with plenty of job opportunities.  But I thought we were supposed to be too small and too poor?  Another little point about all this is that the threat of mass immigration is based on Scotland having to become part of the Schengen agreement on passport free travel.  But, weren’t we told that Scotland wouldn’t actually be in the EU and would have to re-apply?  Why can’t these Unionists get their story together?  It’s becoming a right hassle keeping up with their constantly changing claims. 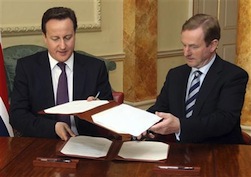 What makes all these apocalyptic threats such nonsense is the existence of the Republic of Ireland.  Only a week before we got these threats against an Independent Scotland the UK Prime Minister, David Cameron was signing a new agreement with Enda Kenny, Taoiseach of the Republic.  This was entitled British Irish Relations - The Next Ten Years.  It is a most fascinating document and well worth reading - you can get the full text here.  It is an excellent example of how neighbouring countries work and co-operate together.  The joint statement begins:  “The relationship between our two countries has never been stronger or more settled, as complex or as important, as it is today.  Our citizens, uniquely linked by geography and history, are connected today as never before through business, politics, culture and sport, travel and technology, and of course family ties.”  Are we to believe that the rest of the UK(RUK) would not want to build a similar relationship with an Independent Scotland?  Just imagine a UK government minister threatening to bomb Dublin airport?  And as regards terrorist threats, well the statement notes that, “We acknowledge the excellent security cooperation between our two governments, and will continue to stand fast together in the face of those who resort to violence, which is abhorred by our people and has no place in our societies.”  There does not seem to any kind of panic about an open land border either as the statement emphasizes:  “We remain firmly committed to preserving and protecting the Common Travel Area, which allows ease of travel for our people. We will continue to work together on immigration issues, and to combat potential vulnerabilities from terrorism, illegal immigration and organised crime.”  Funny how all these doomsayers always manage to forget the UK already has a land border - between Northern Ireland and the Republic.
Apart from some specifics as mentioned above the joint statement also contains this gem:  “2012 also marks the beginning of a decade of centenary commemorations of events that helped shape our political destinies. This series of commemorations offers us an opportunity to explore and reflect on key episodes of our past. We will do so in a spirit of historical accuracy, mutual respect, inclusiveness and reconciliation.  But we want to ensure that this is a decade not only of remembering but also of looking forward; a decade of renewed and strengthened co-operation between our two countries.”  Beautiful isn’t it?  Now why oh why cannot Unionists imagine such a joint statement with these great words - mutual respect, inclusiveness, renewed and strengthened co-operation - between an Independent Scotland and RUK?  After all the current crop of Unionist parties were against the independence of Ireland all those years ago.  What kind of threats were issued against the Irish back in the 1920s?  If the UK can develop a relationship with the Republic based on mutual respect and strengthened co-operation, then RUK will do so with an Independent Scotland.
It’s way past time for Unionists to apply some of their positive thinking about relationships with Ireland to Scotland.  Then again I’m still looking for a flying pig.
Posted by Unknown at 13:48