Criticising Israel - is it allowed? 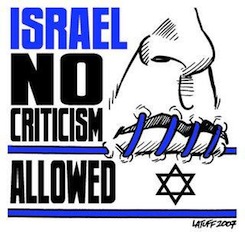 For years now in the USA it has been almost impossible for a major politician or even a commentator to utter any kind of criticism of Israel and survive.  It seems that the UK is once again about to slavishly follow where the USA leads.  At least that is what one must understand from the reaction to a recent speech by LibDem peer Lady Tonge.  This is part of what she said, "Beware Israel. Israel is not going to be there for ever in its present form. One day, the United States of America will get sick of giving £70bn a year to Israel to support what I call America's aircraft carrier in the Middle East – that is Israel. One day, the American people are going to say to the Israel lobby in the USA: enough is enough."  She added: "Israel will lose support and then they will reap what they have sown."  In response leading politicians from all parties condemned her and her comments and she has been expelled from the LibDem party.
So much for the notion of free speech and the prospects for some kind of rational debate about Israel/Palestine.  It seems that we in the UK are now to suffer from a stultifying praise and defend Israel at all costs mentality in our public discourse.  What is most fascinating about this eruption of support for Israel is that the one country in the world where comments such as those made by Lady Tonge are commonplace and freely made is Israel itself.  There are many Jewish Israelis, born and brought up and living in Israel who share Lady Tonge’s concerns.  You can find their views in many Israeli magazines and newspapers, including in the mainstream media.
In fact only a couple of days ago, the eminent Jewish Israeli journalist, Gideon Levy, wrote a piece for the Israeli newspaper Haaretz, in which he came to very similar conclusions to Lady Tonge.  The title of the piece gives a flavour of the argument - It’s just a matter of time before US tires of Israel.  In the article he comments on the excessive and unprecedented power that Israel has over the USA.  He even has the audacity to mention the power of rich Jews.  As Levy himself puts it, “Israel features in the American presidential campaign as no other foreign country does, with the candidates vying for the sobriquet of “biggest Israel-lover” to the point where it often seems to be the main issue. Rich Jews like Sheldon Adelson donate enormous war chests to candidates for the sole purpose of buying their support for Israel.......”   Levy goes on to ask some questions about the future, questions that are remarkably close to Lady Tonge’s.  He wrote,  “One day, perhaps, even in brainwashed America the questions may begin: another war? Is it right to put more American soldiers in harm’s way for an interest that is more Israeli than it is American?”  He concludes with this warning to Israel,  “ But one day the rope could snap and the whole thing could blow up in the face of power-drunk Israel: Israel doesn’t know when to stop, and it could pay dearly as a result.”  Just as well for Gideon Levy that he’s not a member of UK political party or was speaking in London.  You can read the whole piece here.
Uri Avnery is another distinguished Jewish Israeli journalist who is not afraid of exposing the realities of Israel.  In a recent article for AntiWar he wrote about the options facing Israel in the future and none were very attractive.  He too would probably subscribe to the view that Israel cannot survive for ever in its present form.  His article looks at possible scenarios for Israel in the near future.  One is a state that is non-democratic.  He is even willing to use the work apartheid to describes this option.  According to Avnery, “This needs no conscious decision, since it is the default situation that already exists de facto.  This means, to use the popular catchphrase, an apartheid state: a state in which every instrument of power is in the hands of the Jewish-Israeli majority (some 6.5 million people), with limited rights for the 1.5 million Palestinians with Israeli citizenship. The Palestinians in the occupied West Bank, East Jerusalem, and the Gaza Strip, some 4 million, are granted no rights whatsoever — national, human, or civil.”  In Avnery’s view this situation were it to continue would eventually lead to what he terms national suicide.  He goes on to outline other scenarios, all of which lead to the same outcome - national suicide.  However as an optimist, he believes things can change for the better and concludes, “I believe that the people of Israel — the Israeli nation — have the will to survive. But in order to survive, they must wake up from their apathetic stupor and change course — turning toward peace based on the two-state solution, separating the state from religion, and building a new social order.  In the Jewish religion, suicide is a sin. It would be ironic if future historians were to conclude that the “Jewish state” committed suicide.”  You can read the whole of Avnery’s piece here.
I have singled out two articles by leading Jewish Israeli journalists to highlight the appalling hypocrisy of those who would try to stifle legitimate criticism of Israel.  If the same kind of comments and criticisms can be made public in Israel, by Jewish Israelis, on what grounds can they be dismissed here in the UK?  Only someone who is frightened of the power of the pro Israel lobby?
Posted by Unknown at 14:29

Email ThisBlogThis!Share to TwitterShare to FacebookShare to Pinterest
Labels: Israel