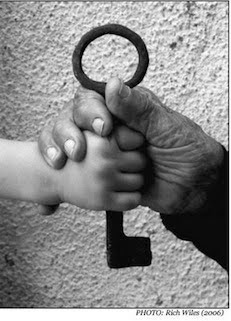 On the 15th May Palestinians commemorated Al-Nakba - The Catastrophe: specifically the catastrophic removal of Palestinian families from their ancestral villages. 15th May 1948 was the date of the foundation of the state of Israel, and the Palestinian catastrophe is the little told part of this history. In the war that accompanied Israel’s birth, hundreds of thousands of Palestinians fled or were expelled from their lands. They have not been allowed back. Today there are more than 4.7 million Palestinian refugees - by far the largest refugee group in the world.

To express our solidarity with the sufferings of the Palestinians, Tayside for Justice in Palestine staged a public reading of Carol Churchill’s short play - Seven Jewish Children. This play was written at the time of the Israeli attack on Gaza in 2008. Its seven short scenes from different moments in history explore how the horrors faced by Jewish victims have been exploited to build and sustain an Israeli aggression that fails to recognise its own impact on the new Palestinian victims. In each vignette the different characters debate how to present their current situation to a young child, but at the same time they are constructing a justifying myth that supports an increasingly brutal society. Israeli Jews enjoy considerable material comforts while Palestinians have been reduced to poverty levels and are bound in by numerous restrictions. However the evolution of this Iaraeli national myth has led Israelis into their own social catastrophe. This will only end when Israel recognises the rights of the Palestinian people. One of our members made a video of the performance. You can watch part 1 here and part 2 here. Altogether the performance is just short of 15 minutes.

The play was accompanied with an exhibition of photographs taken by Rich Wiles, a British photographer who lives and works in a Palestinian refugee camp in the West Bank. The photo at the top of this post is one of Rich's photos. The key is a potent symbol for Palestinians as it represents their lost homes. Each refugee family passes the key to their former home on to the next generation as an expression of their determination to return.

Though Al-Nakba refers to the events of 1948/49, the dispossession and expulsion of Palestinians has continued right up to the present. Since the 1967 war and the Israeli occupation of the West Bank, Gaza, East Jerusalem and the Golan, more and more Palestinians have lost their homes and land. Just about every day we see further Israeli appropriations of Palestinian land and further restrictions put on the lives of Palestinian people. To get an idea of what Palestinians face you can watch this short video by Joseph Dana. It is from last Friday’s demo in the West Bank village of Nabi Sallih. The demonstration is part of a weekly protest by the village against the occupation and the confiscation of their agricultural land by (illegal) settlers from Halamish. For a more detailed description of the protest and the Israeli military reaction you can read Noam’s first hand account of the day. Noam Sheizaf is a freelance journalist and editor who runs his own blog - Promised Land.

For another glimpse into the mindset of Israelis and how their violent occupation is almost blindly supported by the USA media, Philip Weiss recently ran a fascinating piece by David Samel recalling an incident that took place in April 1988 in which a young Israeli girl was killed. All the initial reporting in Israel and in the USA blamed Palestinians for her death. However it soon emerged that she had been killed by an Israeli. As David Samel puts it: “So let’s sum this all up. A group of illegal Israeli settlers take a deliberately provocative hike to an Arab village to show them who’s boss. They allow an Israeli racist hothead with a violent history to be an armed guard, and he predictably murders two Palestinians and shoots two others, and accidentally kills an Israeli girl. The (New York) Times blames both sides equally. The Israeli army kills a third Palestinian youth for “running away” and destroys 14 homes, most if not all of them after learning who was responsible for killing the Israeli. The killer of three is allowed to walk free, while the pregnant sister of one of the Palestinian victims goes to prison, and six men from the village are expelled from the country.” Plus ça change, plus c’est la même chose. Whatever happens you can be sure that Israel and the media will blame the Palestinians. Read the whole account here.

If you want to learn more about Al-Nakba and the on-going struggle of Palestinians to exercise their right of return the following three websites make a good starting point.

Palestineremembered aims to preserve the memories and experiences of Palestinian refugees, especially those who were ethnically cleansed as a result of the 1948 war.

BADIL Resource Center for Palestinian Residency and Refugee Rights is an independent, community-based non-profit organization mandated to defend and promote the rights of Palestinian refugees.

Al-Awda, The Palestine Right to Return Coalition focuses on the rights of all Palestinian refugees to return to their homes and land of origin.

To conclude this post here are a couple of short videos which recall in photos the tragedy of Al-Nakba.

Email ThisBlogThis!Share to TwitterShare to FacebookShare to Pinterest
Labels: Palestine