The Future of the Euro 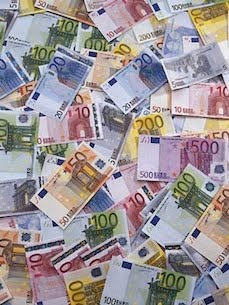 The Euro is back in the news as it continues to fall, and the various anti EU factions in the UK are having a field day. From Eurosceptics to the downright hostile they cheer on every sign of weakness in the Euro and anticipate with glee its imminent demise. However they are in danger of suffering from the old Chinese saying - beware of what you wish. For they seem to be unaware that an effective devaluation of the Euro or the break up of the Euro and the re-emergence of national currencies with devaluation damages the UK economy and perhaps pushes us into Greece style crisis. Then again the anti EU brigade have never been known for rational thinking anyway.

What though is the Future of Euro? The first thing to remember is that like every development in the EU, the single currency is first and foremost a political decision and not merely an economic one. As such I would expect that the EU will do all it can to ensure that the Euro survives, come what may. If that means further economic and fiscal integration then so be it. And in the short run pretty savage austerity measures. The markets however, especially the financial markets are pretty irrational artifices and no-one can predict what will happen.

However what I do want to do in this post is to challenge the notion, prevalent in Anglo-Saxon discourses, that devaluation is the answer. For those calling for the demise of the Euro are in effect calling for a devaluation for countries such as Greece, Spain, Portugal, Italy and Ireland. This in addition to the UK which has already effectively devalued by about 20%. Why is devaluation not the answer? I found a good explanation of the dangers of devaluation in a comment by someone known as Scipio1 (I couldn’t find his or her real identity) on the Guardian’s Comment if Free site. Scipio1 wrote: “Where to start! Okay: devaluation. A policy which is explicitly designed to make a country poorer in order that it will import less and export more, since its products will become cheaper. Pace Mr Wilson, this will affect the pound in your pocket. And of course although export prices will be lower, import prices will be higher. The point about this is that much of the imports into the UK is of raw materials and semi-finished goods used by the export industries. This cost push inflation will eventually will find its way into the export sector and this will make British exports less competitive as the imported inflation pushes up their price. Of course like all economic policies this has some very nasty downsides. The UK economy for example is running at less than full capacity producing niggardly growth rates, and yet already inflation is beginning to pick up. The latest figures being 3.7% for CPI and 4.4% for RPI (or should I say RIP!) Of course this is one of the consequences of low interest rates and devaluation which in any event amount to the same thing. But try to imagine what would the situation be like if Greece left the euro and went back to the Drachma. Of course there would be an immediate run on the currency with a type of Greshams law coming into existence. Wise heads would hold euros not Drachmas, the latter would be seen as Confederate money, which everyone would be trying to get rid of. So if anything the situation would be even worse in Greece than it is at present. Let us take this a little further. Imagine a Europe without the euro. All the separate currencies competing against each other with round after round of competitive devaluations, a situation reminiscent of the 1930s with each nation trying to make itself poorer in order to export their way out of stagnation. This would be the ultimate logic of the devaluation argument. If it is such a brilliant idea, then everyone would join in and it would be nullified and even counter-productive. It is a seductive but ultimately seriously flawed argument, reminiscent of Keynes fallacy of composition. What might seem productive when only one agency (country) carries out a policy becomes useless and damaging when everyone decides to carry out said policy.”

So, it seems that devaluation is not the answer, but more of a red herring. The key is that if the root cause of a country’s economic woes is that its industries and services are uncompetitive - which is the current case - then devaluation does not in itself do anything about changing this. Devaluation on its own is merely a temporary respite - at the expense of a lowering of living standards. But if nothing is done to make industry and services more competitive, then in a few years time the same crisis will repeat itself.

What can be done to help industries and services become more competitive? Ultimately this is up to the entrepreneurs and their management teams. What a government can do is ensure that its fiscal policy maintains a sound and stable economy. And this is so, in or out of the Euro. In Europe the benchmark for decades has been Germany, which has maintained a sound currency (formerly the DMark) and a stable and solid economy, based on high quality exports. It is instructive to compare the responses of various countries to keeping up with Germany. On the one hand there are those countries that have for decades more or less mirrored the German economic model. In particular have tied their currency to the DMark and kept government spending under control. This includes a group of non-Euro countries such as Switzerland, Norway, Sweden and Denmark. It also includes countries which are now part of the Eurozone, such as France, the Netherlands and Austria. Their success over the long run would seem to indicate quite strongly that the Euro is not the problem. A most instructive case is France, which used to be a byword for repeated devaluations. But in the early 1980s the country moved quite suddenly, with a series of budget austerity measures, to the opposite policy. The French Franc was tied to the DMark and successive governments have stuck to the twin track of a strong Franc and budgetary rigour. This has paid off for France and the other countries, as they are all less affected by the market turmoils of recent months.

On the other hand the southern European countries along with the UK and Ireland have pursued a laxer fiscal and monetary policy. Some, including the UK have from time to time tried to track the DMark, but none have been prepared to follow this policy through. The result is that all these countries, in or out of the Euro, are to a greater or lesser extent uncompetitive with the rest of the EU.

What the above shows to my mind is that a country needs to adopt and maintain a consistent fiscal and monetary policy based on maintaining a stable currency, particularly in relation to Germany. It is also interesting to note that in all the countries mentioned above it was the political and business leadership which agreed on the policy and pushed it through. No popular referendums were held!

All this talk about the Euro and devaluations is just a smokescreen for avoiding the real issues - which is about how to restructure our economy. Though much of the above has focused on the strength of the German economy, this is not in my view a sustainable model. By definition not all countries can maintain an export surplus. Europe as a whole, including the UK and Germany, needs to rebalance its economy. As a main cause of the current crisis was the unsustainable levels of private and public debt, then a major part of the solution will involve devising an economic model that does not rely on ever faster and evermore unsustainable growth.