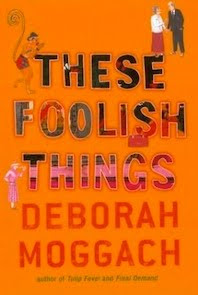 This was the Reading Group’s book for June and a very enjoyable read too. I had already read a previous novel by Deborah Moggach - Tulip Fever. That was a kind of romantic thriller, set in Amsterdam in the 17th century and also very good. These Foolish Things could not be more different. Here the setting for the novel is a retirement home for elderly Brits located in India. This does not seem a very promising idea and could easily have degenerated into the Anglo-India equivalent of 'Allo 'Allo!. However Moggach is far too clever and serious a writer to fall into that trap. For this home for the elderly is not set in one of India’s beautiful tourist centres, but rather in Bangalore, a modern bustling city, home to India’s high tech industries, and with little to offer the sightseer. The home itself is a somewhat dilapidated former bungalow, now rather somnolent guest house, where some of the staff are older than the retired residents.

So the backdrop for the novel is the real India, nothing fancy and a bit down at heel. And Moggach uses this backdrop to weave a gentle, but entertaining and witty tale which features a rich and vividly drawn range of wonderful characters. The novel is unusual in that there is really no central character. The Kapoor family - husband, wife and father-in-law - feature prominently, but this is not just about them. In telling the stories about the various retirees from Britain and the local people associated with the home, Moggach is able to touch on some serious and important subjects - racism, the attitude of Brits to India and Indians, family relationships and of course growing old. No doubt because it is mainly set in India, the novel is able to contrast the differing attitudes to aging, caring for elderly relatives and to death itself. For one of the strengths of the novel is that it does not attempt to paint a rosy picture of growing old. People die and others suffer pain and loss. On the other hand life goes on and some people, even elderly people can make a fresh start - get married, re-marry or just come to terms with growing old.

Given the perilous state of the UK economy and a government hell bent on cutting public spending, perhaps the idea of setting up cheap retirement homes in India will become a reality. Though please not in Bangalore. If I am to end up in India, make it somewhere nice, like Goa or Kerala. Now where is that statue of Ganesha!

Email ThisBlogThis!Share to TwitterShare to FacebookShare to Pinterest
Labels: Novel