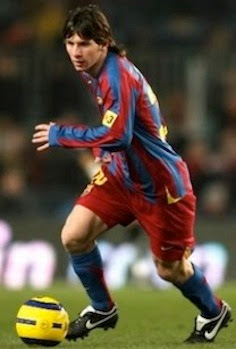 This was always going to be a difficult season for Barça. The previous season they won all three major competitions - Spanish League and Cup and the Champions League. The first time any team had achieved this triple crown. Something almost impossible to repeat. So Barça did very well to retain one of their crowns from last season - the Spanish League. And they did so with style, amassing 99 points - the highest points total in Spanish league history. They also had to overcome a rejuvenated and very expensively recruited Real Madrid. The competition went down to the last day and Barça only won by three points. Overall Barça dominated the season and only had one serious drop in form. This was immediately after the winter break. They dropped four points in the league, suffering their only defeat - away to Atletico Madrid - and losing out in the Cup to Sevilla, who went on to win that trophy. They reached the semi-finals of the Champions League and were a tad unlucky to lose to Inter Milan, 3-2 on aggregate. However last season Barça were the beneficiaries of good fortune in their semi-final against Chelsea - so you win some and you lose some.

In addition to retaining their League title, Barça also won three more trophies - the Spanish and Uefa Supercups and the big one, the World Club Championship - for the first time in the club’s history. All in all then a great achievement, for as the legendary Johan Cruyff points out, it is easier to reach the top than to stay there, year after year. One has only to compare this season with season 2006-2007. Then Barça had again just won the Champions League (and the Spanish League), but finished the season trophyless. What then was the difference between 2006-2007 and 2009-2010? Two key factors I would suggest. This season Barça has had a slightly bigger and more experienced squad and they have had slightly less injuries. Crucial factors in a long and tiring season.

The three new signings have had mixed fortunes. The most successful was the least expensive - Maxwell who came as cover for Abidal in the left back slot. But with injuries limiting Abidal’s appearances, Maxwell played most of the time, and did so with distinction. Ibrahimović was the most expensive and had the additional challenge of replacing Eto’o, a prolific goalscorer and fans’ favourite. Overall Ibrahimović did well for a first season, scoring 16 league goals. He started the season very well with 11 goals in 13 league matches. After the mid winter break though he was never quite the same. A series of niggling injuries and suspensions meant he was unable to recapture his early season form. Still not a bad return for his first full season. The third newcomer, centre back Chygrinskiy, had a pretty poor season. Ineligible for the Champions League, he found it very difficult to adjust to Barça’s style of play and at times looked slow and cumbersome.

Pep Guardiola and his team have already begun planning for next season. Which areas of the team most need strengthening? The defence has probably been the most reliable and consistent part of the team this season. Valdés continues his rich vein of form and has at last been rewarded with a place in the Spanish squad for the World Cup. Well done Victor!

The first choice back four of Alves, Piqué, Puyol and Abidal is one of the best in the world. Alas that Abidal missed most of the season through injury. While Maxwell did well as his replacement, he is more of an attacking player who can often be caught out defensively, as happened most noticeably in Milan against Inter in the semi-final of the Champions League. So a key question for Pep and his team is can they rely on Abidal to last a whole season free of injury? If not do they need to get in a top class replacement? On the other flank there is still no cover for Alves. When he is unavailable Puyol moves sideways to fill in. As Puyol started as a right back this is not a bad move, though it does leave the central partnership a bit exposed. For Puyol and Piqué make a tremendous pairing. Going on this season the cover is not too reliable. Marquez seems to be past his best and only played rarely. As did new arrival Chygrinskiy. Half way through the season they did recover Milito who had been out injured for two seasons. However the questions remain, how reliable is Chygrinskiy and is Milito fully recovered and back to his best? As usual with Barça the defence is probably not a priority for the coming season.

What about the midfield, which is usually the great strength of Barça teams. This is the one area where injury did play a significant part in the performance of the team. Iniesta missed about half the season through one kind of injury or another, thus leaving Xavi to shoulder most of the responsibility for creative play. Not that Keita or Touré for that matter do not make useful contributions, but neither has the control or vision of an Iniesta. Which probably explains why Barça are so keen to sign Cesc Fábregas from Arsenal. However Cesc is also prone to injury. If there are serious doubts about Iniesta’s full recovery, signing another (very expensive) injury prone midfielder may not be the best idea. Once again the future may lie with some of Barça’s up and coming youngsters such as Jonathan Dos Santos and Thiago Alcántara. Regarding Touré there are persistent media reports that he is on his way out. Pep Guardiola seems to prefer Busquets as his first choice holding midfielder which does not please Touré. He still gets to play plenty of matches, but will he accept that he is no longer first choice and buckle down to challenging Busquets for the position? If he does go, will Guardiola need to buy in a replacement? Not sure about the youngsters in that position in the B team.

As for the attack this again was not quite as lethal as last season. Though Ibrahimović did not set the heather alight, he did score a respectable 16 league goals. The big difference with last season was the almost complete disappearance of Henry, who rarely played and even more rarely scored. On the other hand Messi just gets better and better. He was the leading goal scorer in the league with 34 goals which equalled the club record held by Ronaldo. Pedro Rodriguez emerged as the leading contender for the third attacking spot, relegating Henry to the bench most of the time. Not only did Pedro score 12 league goals he also scored in all the other competitions Barça played in - a record. Another young player, still only 19 years old, Bojan finished the season strongly, playing instead of Ibrahimović for the latter part of the season, scoring 8 league goals. A comparison between Bojan and Pedro is most interesting. Their scoring record in the league is very similar. Pedro scored 12 goals from 34 matches, which works out at a rate of one goal every 2.83 matches. Bojan’s 8 goals came from 23 matches, half of these as a substitute, yet his goals rate works out at one goal every 2.87 matches. Nothing between them, yet Guardiola clearly prefers Pedro. Mainly I suspect because is a natural wide player who scores useful goals, while Bojan is more of a centre forward, but lacks the height to make the position his own. So when he does play he tends to play wide which is not his natural position. Hard game!

The attack is the one area where Barça have already make their first signing for the new season. David Villa, Spanish international, has joined from Valencia. Villa is a pretty reliable striker both with Valencia and the Spanish national team. His arrival should certainly strengthen Barça’s attacking options. The key question is does his arrival mean the departure of Ibrahimović? The club say no, but the media say yes. Will no doubt depend on how much they get offered for him. Money nearly always talks. However, Villa, though a striker, can play wide and a forward line of Messi, Ibrahimović and Villa looks a very powerful and flexible one. With the likes of Pedro and Bojan in reserve. With the number of games that a team like Barça expect to play, they need all the experienced players they can get. I would expect Ibrahimović to stay for at least the next season. Any other new arrivals? The media are as usual full of stories, imagined or not. With the world cup due to start soon the club will want to get any new signings sorted out sooner rather than later. Watch this space.