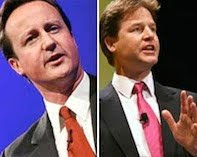 So that’s it then. The UK now has its first proper coalition government for almost a century. The week after the election was much more interesting and exciting than the election campaign itself. Would the LIbDems do a deal with the Tories? Could they do a deal with the Tories? After all most LibDem MPs and voters are opposed to the Tories. Could the LIbDems reach an agreement with Labour? And what about the other, minor parties - would they have a role to play in forming the new government?

As it turned out there was less real excitement or intrigue than imagined by the media pundits. It seems that Cameron and Clegg, both from a similar public school background hit it off almost immediately and that was that. The Tories were desperate for power and so it turned out were the LibDems or at least their Parliamentary leadership was.

What was most interesting about the negotiations is what didn’t happen. No serious attempt by the Labour Party to make a deal with the LibDems. Though Gordon Brown and some others in the cabinet made it clear that they were interested in concluding a pact with the LibDems this was never carried through. Almost immediately that it became known that talks were in the offing between Labour and the LibDems out from the woodwork came some dinosours from Labour’s past to rubbish any such deal. Why were people such as David Blunkett and John Reid so quick to scupper any potential Labour and LibDem government? After all the SNP and Plaid Cymru had made it crystal clear that they would support such a so-called ‘progressive coalition’. This would mean a Labour/LibDem government would have a secure if slim majority in Parliament. So why the hostility?

In Scotland at least this must come down to Labour’s almost pathological hostility to the SNP. Labour could not at any cost be seen to be relying on SNP support. Next year there are elections in Scotland and Labour is determined to put maximum distance between them and the SNP. Not sure why the likes of Blunkett and co. opposed a deal in England. Perhaps they realised that the Tories had an overall majority of English MPs and that a Labour/LibDem coalition would not be seen to have the legitimacy to push through English only legislation in areas such as education, health etc.

Whatever the reason, Labour willingly passed up an opportunity to try and build a progressive coalition. This will make their attempts to portray themselves as the only progressive party in the UK as a bit hollow. Won’t stop them trying though.

As for the future, only one thing is certain and that is that Labour will have a new leader by the autumn. Will he, and it looks like only men are standing, make any difference. A more media and camera friendly person can only help, but it still comes down to policies. And here it is hard to detect any real change in Labour. They are nearly all Blairites now. Not much hope of real progressive change from them.

Very difficult at this stage to know how the coalition will affect the LibDems. Throughout the UK they are now inextricably linked with the Tories. And in Scotland and other parts of the UK an election slogan of vote LibDem and get a Tory government will not go down too well. Next year’s elections in Scotland and Wales will therefore be even more interesting than usual. The LidDems have been quite strong in both countries and it will be a key battleground to see if their vote holds up under the scrutiny and stresses of being in government.

As for the coalition government itself - what is its likely future? For all the talk of hostility among some Tories and LibDems I expect the coalition to survive. The big problem, as for all governments, is what Harold Macmillan referred to as ‘events, dear boy, events’. Meaning something completely unexpected turning up to cause havoc to the government. Another financial crisis perhaps? Other than the totally unexpected I think the coalition will survive.

The big question is what damage might they do to the rest of us. Big cuts seem to be right at the top of their agenda. And as usual it will be the poorest who will bear the brunt of the pain and suffering. Rising unemployment, lowering living standards and a decline in public services is the bleak future that awaits most of us. The pain has yet to begin.

A final point about the election. During the campaign the media tried their best to make this into the most significant and trend breaking election ever. Yet after all the singing, shouting and the first ever TV debates not much changed during the election campaign. The final outcome was pretty much as the opinion polls had predicted before the election.